The Story of a Believer who Became a 2x PrizeGrab Winner! 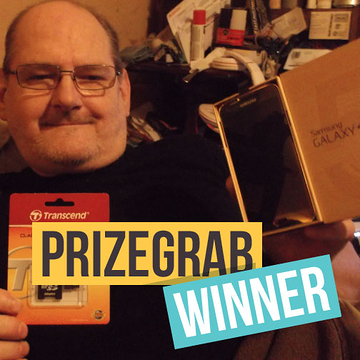 We have winners at PrizeGrab every single day... and sometimes by total random chance the same person wins more than once!

How is it possible to win more than once?

I get asked all the time, “How can I win?” or “What is the secret to winning?” Well that answer is quite simple! Are you ready for Hope’s super secret advice?

Make sure you enter everyday! You cannot win if you don’t enter!

You’ll never hear me forget to suggest to “Maximize your entries for each prize, because there’s no limit to how many prizes you could win!”

PrizeGrab winners like Robert T., from South Bend, Indiana know this advice is true. All it takes is an easy entry to get your name on PrizeGrab’s winner selection list for any prize they want and enter.

Robert has been a loyal PrizeGrab member since November 2013 and has been entering to win prizes often. His lucky run started in early 2014!

First, Robert won a $10 Amazon gift card in January 2014, which is always awesome news to hear! But, then a mere 10 months later, Robert got some more amazing news from the PrizeGrab team!

Robert then won his choice of a Samsung Galaxy S5 or iPhone 5s!!! What exciting news for Robert to receive.  At that time we only had handful of two time winners.  Do you know how much fun it was to tell him he’d won a second time! When asked which phone he'd prefer, he had only one deciding factor...

"... I guess i'll take the biggest one as my fingers are big and i'll need a big screen!"

Well, that's a great reason to choose the Samsung, Robert! We love it when people are excited to win a prize with us, and it makes us happy to pass around the news of winning! But, passing around the news that you've won a second time is super fun for us!

I still receive emails from people who ask if anyone really wins the "big prizes" or if we only hand out the $10 gift cards. Well, I think Robert has something to say about that! He says, 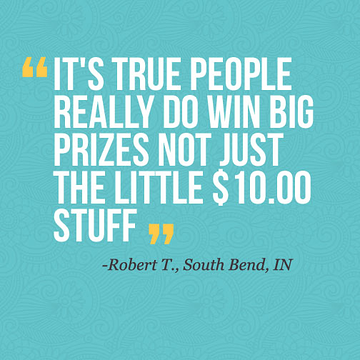 Since winning twice, Robert has been spreading the joy of PrizeGrab with his friends in the hopes that they will win as well!

Out of his 478 days of membership, Robert entered on 377 of those days! It takes persistence to win.

As community manager, the best compliment I can receive daily is hearing from people like Robert who tell me they are telling EVERYONE THEY KNOW about PrizeGrab! I love getting emails from our PrizeGrabbers who think our sweepstakes are so great that they just HAVE to spread the word. 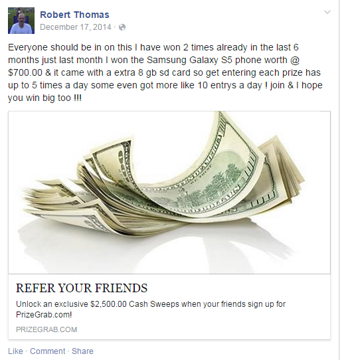 Robert has been referring his friends to PrizeGrab which also unlocks 1-click access to an exclusive $2,500.00 cash prize to anyone who gets a friend to sign up with PrizeGrab. Will Robert win a 3rd time? No one knows yet but you can also get in the running to win by referring a friend here.

So, fellow PrizeGrabbers, keep entering daily! I want to see our PrizeGrabbers winning their favorite sweepstakes every single day! Also make sure to max out your entries on every prize that you like on PrizeGrab! You can't win if you don't enter, and you certainly can't win twice (like Robert) if you don't try! :)

I’m excited to hear which sweepstakes YOU think are the best! Comment below and let me know which sweepstakes on PrizeGrab are your favorite! We have so many prizes on our prize page just waiting for the perfect home! And, it could be YOUR home.

I’d love to hear from you and what you’d think if YOU won twice!

As always, have a blessed and inspired day!